Last Friday I was invited to the premiere of Bomb-itty of Errors, a new theatre production directed by Brook Hall at The Lab Space theater.

Described as “hip hop x Shakespeare x SNL”, the play successfully resuscitates the Shakespeare classic, The Comedy of Errors, with an unabashed injection of modernity. 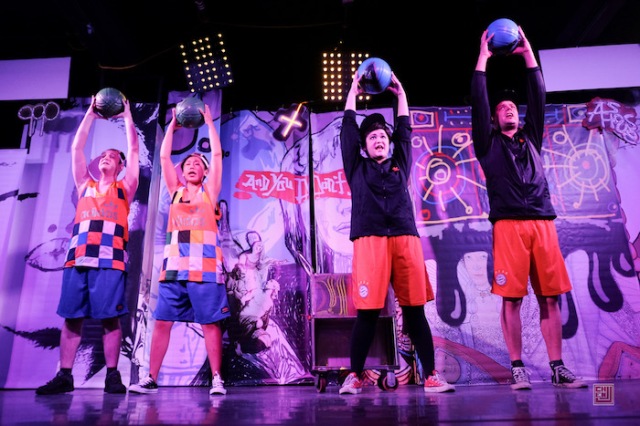 The opening scene of Bomb-itty of errors introduces us to the two sets of twins central to the play (Photo credit: The LAB Space)

Following the fundamental storyline of The Comedy of Errors, albeit with a trove of contemporary cultural references, Bomb-itty is the story of two sets of identical twins split up at birth who fatefully end up in the same city. Of course, this minor fact is completely unbeknownst to any of them, and is the subsequent cause of all manner of cases of mistaken identity.

As the litany of problems pile high, the audience can revel in the hilarious treat of watching the whole emotional catastrophe unfold from the sidelines.

The whole ordeal is rapped by a dynamic cast made up of Meg Anderson, Steve Coetzee, Airy 小女伶, and Charlie Storrar. First night jitters were notably absent from the confident and convincing cast, who didn’t miss, or mess up, rapping a single line. Their vivacious performances were most certainly appreciated by the audience, who I folded over with laughter throughout the performance. 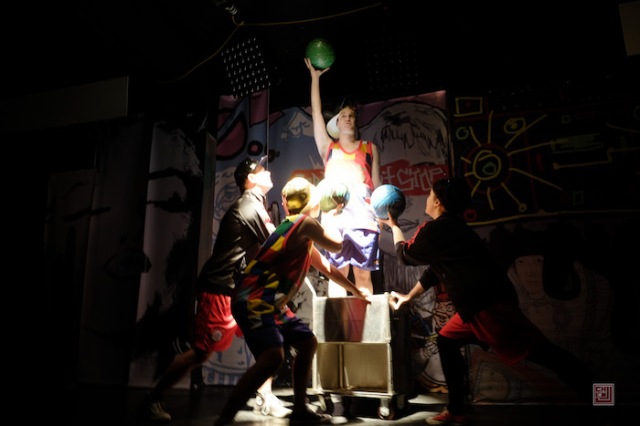 The play is a colorful take on a beloved Shakespeare classic (Photo credit: The Lab Space)

Credit should also be given to the live DJ set by DJ Cross Cutz, whose inclusion helped keep the whole play punchy and the actors on beat.

Bomb-itty is a definite break from the usual lineup of plays shown at The LAB Space. If you caught the brilliant play God of Carnage, and are expecting something similar, don’t. You’ll need to go in with an open mind and a sense of humor to make the most of this unconventional play.

All the actors did a superb job rapping Shakespeare (Photo credit: The LAB Space)

The pace is relentless, so if your ears aren’t perked you may miss some lines. Perhaps it was just me, but I found it a bit difficult to properly hear what the actors were saying when they were all rapping at once.

If you can read Mandarin, you have the added bonus of referring to the Chinese subtitles which appear above the set.

It’s a 90 minute whirlwind of love and betrayal, topped off with a healthy dose of crossdressing. As the promo correctly claims, “Shakespeare’s never sounded so fresh!”

Tickets can be bought at the door, but it is recommended they are booked online in advance to avoid disappointment.

The official banner of Bomb-itty of Errors (Photo credit: The Lab Space)

← My Interview on BlogExpat.com
What’s Happening in Taipei: December Events →