Visit the Miniatures Museum of Taiwan

Yes, I admit “cool” and “Miniatures Museum” may seem like an unconventional pairing. After all, I don’t think the typical idea of cool involves peering into tiny fantasy worlds on a bright Saturday afternoon.

A peek into the displays at the Miniatures Museum of Taiwan…

But stay with me here for a sec. I’d like to try to convince you disbelievers that the Miniatures Museum of Taiwan (袖珍博物館) is much more enjoyable than you’d think. Perhaps, I can even coax some of you to let go of your preconceptions and pay the rather peculiar place a visit. Let’s take a look inside…

A rather plush master bedroom

As you see, the museum is a homage to all things miniature sized. Most works are sized at an impressively small ratio of 12:1- an impressive feat in its own right. Separated into different themes, each section features works by a range of reknowned miniature artists.

And a gold encrusted living room

Strolling around, it’s easy to slip into a state akin to that of a wide eyed child. My friend Rachel and I were both taken aback by the extent this strange place captivated us. We found ourselves glued to the glass, trying to peer ever more closely into each display. With your eyes darting from each object, it becomes addictive to see every tiny part which makes up the whole.

“That detail is incredible” we gasped, later hearing similar sentiments from the other visitors as we circulated around the museum. From the functioning TV smaller than a postage stamp, to the teensy objects tucked away from the center focus, that while hidden, were still crafted with the same level of fine detail as all others, it’s hard not to be at least impressed at how much care each work demonstrates.

And these other visitors I just mentioned- they’re not just kids, as you would expect. Adults far outnumbered the knee-high patrons. And while the museum isn’t crowded, you wouldn’t says its lacking patrons. Which is heartwarming, because it’s really quite a kooky place. 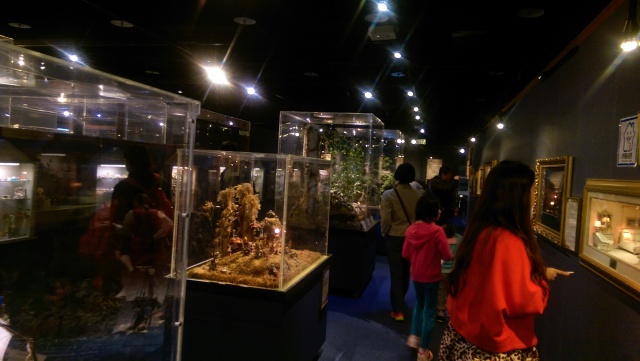 Visitors peering through the glass at the Miniatures Museum of Taiwan

Sure, it doesn’t by any means have the grandeur of the Palace Museum, or the popularity of any of Taipei’s other museums. Despite being a relatively new museum, it has a slightly outdated feel, and lacks a certain sleekness about it. Some of the works don’t impress as much as the others, but that’s to be expected in any museum.

But to me, that doesn’t matter. In fact, this all adds to its charm.

God I wish that cheese was real…

The quality I think makes the Miniature Museum so special is not only the sheer volume of works to see (because for a relatively small museum, there’s a lot to see), but how spectacular the detail is in each work.

To think that each teeny, tiny piece which made up each teeny tiny object was constructed by hand is a testament to the incredible craftsmanship of each artist.

After seeing these works, it would not unfair to dismiss the creation of miniatures as a simple hobby requiring little in the way of thought or skill. These works show the labor and vision of its artists.

Moreover, especially after reading the info panels, you’ll even discover that the works provide a snapshot of the ideals and values of the time of their making. A glimpse into the past, and a point of comparison for the present.

A peek through the window

Its charming quaintness and its sheer level of dedication to the art of miniatures immediately pushed aside any reservations I had about attending the museum.

When my friend who was visiting Taipei first shared his fantastic experience of attending the museum, I must say I couldn’t quite believe him. Really? You’re raving about the Miniatures Museum? After all, this is the type of guy you wouldn’t expect in a million years to be interested in something so niche as miniatures.

A selection of classic Barbie dolls on display

At first, I thought he was just playing me. He couldn’t possibly be serious! But as became more animated as he spoke about how fascinatingly bizarre it was, I started to become curious myself. He said he’d gone alone with a friend who was also not remotely interested in anything to the like of miniatures, so had gone in for a bit of a laugh. Both were surprised when they had a great time. He assured me I would too. 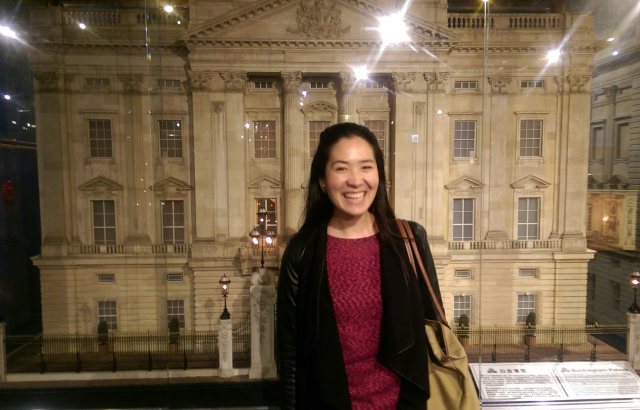 My first trip to England, courtesy of the Museum

As I’m a bit afraid that some of you might go now and write to me angrily after about how you didn’t have such a good time, I’d like to make it clear that this museum is certainly not for everyone (but then again, which place is?).

All the little soldiers lined up in all in a row

But if you push aside your preconceptions, go in with an open mind, and just tap into that child-like curiosity that rests dormant most of the time, maybe you’ll find it a “cool” and unique experience.

And you know what, I’m not at all embarrassed to say so.

Want to find out about Taipei’s other museums? My Guide to Taipei’s Museums lists ALL of Taipei’s major museums to help  you plan your next visit.

A simple map to the Miniatures Muesum

Protip: Don’t forget to leave time to check out the gift store at the end. For anyone who catches the miniatures bug, you’ll be able to take a piece home from the wide selection of souvenirs on sale. I picked up this gorgeous typewriter below. Try to guess why 😉 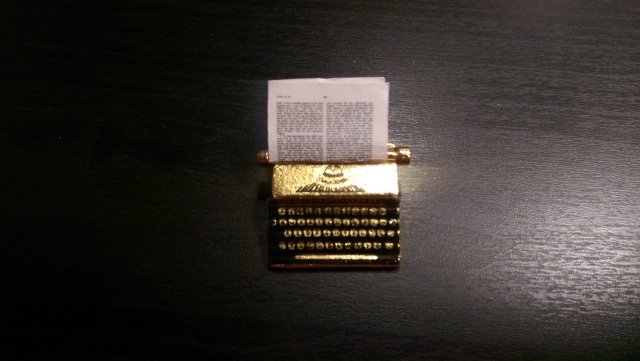 Oh isn’t this typewriter just the sweetest?! It’s the size of a small coin!

Yes, you can go crazy buying your own miniatures to take home at the gift store!