You know when you’re trying to express your sentiments about something you feel very strongly about, but when you speak the words aloud, they sound tangled and confused? In your head, the ideas flow much more poetically, but out aloud- they do not hold the same power you wish them to.

But one day, you happen to read or hear someone say piece together your sentiments pretty much exactly the way you were trying to, only a thousandfold more eloquently.

This. This is what I’ve been trying to convey to countless people, countless times about art. In various entries here (here and here), I’ve written about the importance of art in society. I’ve shared my belief that art should not be a caged entity- it should be accessible and inviting. People shouldn’t be afraid of art– of its meanings, of its often convoluted (or on the other hand, seemingly simplistic) ideas.

Last week I had a free day ~all to myself~,something you may recall that I’m trying to be fully comfortable with. Inspired by all those that left me comments of support and anecdotes after that post (thank you again!), I set off to spend a fulfilling day of gallery hopping alone.

The Keith Haring’s Multiplexism exhibition at the National Museum of History was the main draw card for the day. The showing of Multiplexism is a significant coup for Taiwan’s art scene, for it is Taiwan’s first-ever large scale exhibition of the artist. Ever since it opened in January this year, it had been on my “must get around to seeing” list. Fortunately, I got a strong nudge to finally go after a glowing recommendation from my friend. I’m so glad I did, because it was nothing short of spectacular.

Keith Haring is undoubtedly one of the most iconic artists of the 20th century. Even if his name is unfamiliar, it is likely you have come across his imagery. Take this baby- his most widely-recognised and frequently used symbol, which has become something of a representation of himself within his works.

The thick, bold lines and minimalist forms which embody his work may be mistaken to those unfamiliar as overly simplistic and almost child-like. At first glance, they may appear as nothing more than the overt image presented- a dog, a baby, a tangle of people, an angel.

But the wonderfully alluring thing about Haring’s art is that the multifacted meanings behind his work are not readily understood with a cursory glance.

In order to understand the works, you need to understand the artist- the man, whose hands used those thick, bold and simple strokes to convey powerful messages about life, death, the struggles of the everyday man, homosexuality, AIDS, authoritarianism, and power play dynamics. 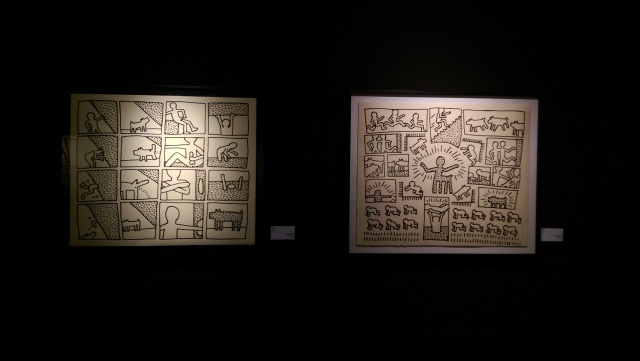 Had I not read the information panels scattered throughout the exhibit which gave insight to Haring, I too would have walked away with only a superficial understanding of his works.

I now have an overwhelming appreciation for this outspoken and rebellious man who, in his tragically short life and career, used his art as a means of projecting these important messages to the masses. He made people stop and think. Think about subjects that were uncomfortable or confronting- those that are all too easily ignored.

His work- especially now- is indeed accessible on a mass scale- it is splashed across multiple media forms- posters, merchandise, clothing. It has infiltrated daily life and pop culture to the extent that you may have mistaken it for being a “brand” rather than art.

In a way, this is true. The reason his art can be seen everywhere is because it was Haring’s personal endeavor to make his art seen and spoken about by everyone, irrespective of race, gender or class. He believed that the wider the platform of accessibility, the more far-reaching his messages could be received.

In fact, in order to proliferate his art he first used the blank sheets of paper found in subway ads in New York to draw his images. He would sometimes draw as many as 40 a day- with the intention of communicating to the masses of daily subway, who represented a diversity of race, class and gender.

He was criticised harshly for this self-proliferation of his own art. Some other artists saw it to be vulgar- how could any self-respecting artist be so unapologetic- callous even, in producing art for everyone, everywhere? “Forcing” people to view what was still considered as taboo- nudity, liberal sex, homosexuality and the like.

Fortunately, some artists- most notably, Andy Warhol, supported his cause. Warhol saw through the wrongful images that had been constructed by Haring’s detractors and saw a man who was not self-serving, but rather, trying to create a more harmonious, equal, embracing, educated and subsequently stronger society for one and all.

They even collaborated on a set of work featuring one of Haring’s childhood favourite characters, Mickey Mouse. It is rarely seen in its set of four, so it’s a real treat to see it here in Taipei. Take a look at the piece and have a guess what meaning is imbued in the piece. It is not merely a playful pop-art take on one of the most beloved characters in history. It is a sarcastic commentary on “capitalism’s worship of money”. Perhaps, you can see through this example that Haring’s works carry deeper meanings than you first considered.

Forgive me for bumbling on about Haring- such is the power of the exhibition that even a week later, I am still consumed reflecting on what I saw and read. The exhibition itself is a stunning collection of some of Haring’s most important works. There are a bountiful number of works- in fact I was pleasantly taken aback by the sheer size of the exhibition. In order to make the most of it, set aside at least an hour to go through it. (Personally I spent a good two plus hours there, completely hypnotised by the works and the man).

The exhibition opens with his “Blueprint Drawing” series. All painted on silkscreen, I was surprised to note that they all were produced in 1990. Haring tragically passed away in February 1990 at the young age of 32 after a battle with AIDS, so to see that he was painting right up until his death is an incredible and commendable feat.

The next section is a small room dedicated to a couple of his chalk drawings I mentioned of previously.

Turn a corner and you are confronted with a rainbow of colour. Bright, fluro colours adorn the walls- messages about womanhood, of the anxieties of life are all hidden behind the ironically joyous colours.

The biggest room is primarily dedicated to Haring’s sculptures and children’s works. The sculptures are representations of his most iconic symbols. It’s fascinating to see these usually flat icons in full, 3D glory- their tangibility seemed to me to convey how Haring’s characters are not merely representations of us- they are us.

They are living among us, they are our neighbour next door, the person sitting next to us on the subway. We are the pained men women pictured throughout his paintings, the confused, desperate, existential characters which play center stage in his works.

Also on display are a dozen or so works which show Haring’s commitment to social activism. He created works to draw support for an anti-nuclear world, for furthering literacy and the arts. Perhaps the most dominant cause seen throughout his works is that of supporting AIDS awareness and support- a personal cause given his own tragic struggle with the disease. He was also highly critical of the government, who he saw as turning a blind eye to the AIDS epidemic that ravaged so many. 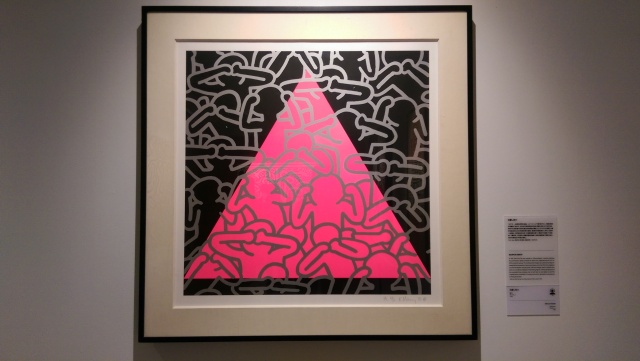 Leaving the exhibition, I felt a bundle of emotions I am still in the middle of processing. Haring was a man, in equal measure outrageous and humble in his aim to make art accessible to all. A man who lived to use his talents for the better good- in the hope that the world would one day become a better place. A man who worked to the end of his life, in a spirit of hope that progressive change can, and should happen. A man who saw more commonalities, than differences between individuals, and called for us to unite- not disband.

His is a life and an attitude that would serve us well to look to and embody, now, more so than ever.