Trainspotting: Reuniting with my old friend, the train floor

Last Sunday I found myself once again gracefully sprawled on a train floor accompanied by an assortment of dust, food bits and other unidentifiable delicacies. Unbelievably, it’s the 4th time in recent years that I’ve found myself seatless on a train, and taking up the only seat I can. What can I say, once you go floor, yo’ be aching to get some mo’.

The first time I was an inexperienced floor-rider at the mere age of 20. My dear friends Anne and Lisa were on a mini tour of Europe, and we found ourselves on seatless on a train from Barcelona to Madrid. As it was a rather long journey, we decided to take residence on train floor in that most luxurious area that connects two carriages together. Some transport god decided to bless Anne with a seat, whilst Lisa and I remained on the floor, cursing Anne under our breaths, “She used to be one of us, now look at her all with her fancy lower back support and cushioned buttocks.”

Lisa and I managed to have a jolly good time, not least when passerby took pity on us and stopped to talk. What went from being a friendly conversation turned out to be a proposition from a Sri Lanken ambassador to visit his home. Gracias señor, but hell to the no!

The second time I was with my wonderful friend Caitlin in North Vietnam. We planned to travel on an overnight train from Hanoi to Lao Cai, and only found out the day before we wanted to depart that it was a national holiday period (usually you can easily buy a ticket on the day before your departure).

Fearing that the tickets would all be sold out, hearing the ticket seller say, “there are only hard seats left” was like a symphony. “OK we will get those!” we mustered to reply enthusiastically. But initial joy was replaced by some trepidation upon seeing our tickets actually had “hard seats” written on them. And “foreigner”- always a nice touch! 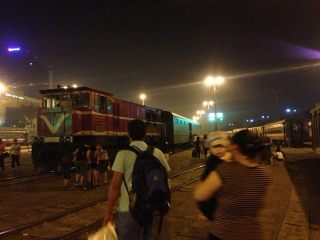 When we entered the carriage that night at around 10pm, we were indeed met by the sight of wooden “seats” set at a perfect 90 degree angle. I use the term seats with some reservation because it was more like a plank of hard, hard wood in a tiny little animal pen. It wouldn’t have been so squishy if it had just been us, but there were 4 people to each coop. We passed by a couple of hours playing French card games with the very nice French guys seating across from us. Given the sheer proximity of the seats opposite to ours we were grateful we lucked out with our travel companions. 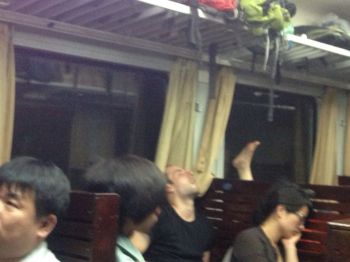 As the clock neared midnight, people started contorting their bodies to fall asleep. I couldn’t exaggerate how small a space we had to work with if I tried. After observing other people with legs and arms flung over each other in every which way- whole families with kids squeezing 6 people in their box, we decided that one of of us would sleep on the “seat” and the other on the “floor”. I offered to sleep on the floor, thinking this to be a noble offer of respite. Turns out kids, that in fact floor was the winning sleeping option! Caitlin tried her best to work with the 1 metre of wood, legs flung over the side, constantly being bumped by passerbyers, but soon joined me on the floor for a night of slumber.

We were truly at one with the floor, feeling the jolts of the train every second as it bumped along the tracks. Hearing all the screeches and choo choos which would put Thomas the Tank Engine to shame. Appreciating all the stuff stuck on the floor. We industriously carpeted the floor with our clothes and tried to make it as comfortable as possible. In the end, I must have managed to get a couple of hours of sleep, and although quite haggered by the end, I was quite chuffed when I got out of that 8 hour train journey alive! 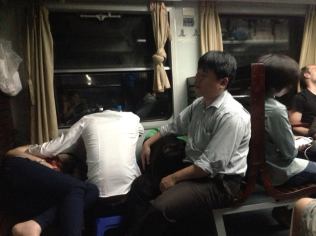 For the return journey, we somehow scored sleeper beds on a more upscale train. I was over the moon. It was going to be like eating plain, stale corn chips, and then days later, eating fresh ones with guacamole. The beds were, admittedly, reasonably comfortable, however as they positioned against the direction of the train (as opposed to our position sleeping of the floor which was in the same direction of the train) I actually had a worse night sleep on the bunker bed than on the floor! 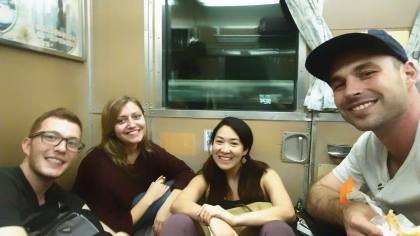 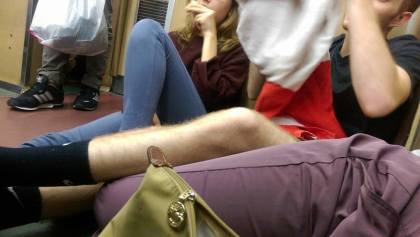 The third time was about two months ago when I went on an overnight train from Taipei to Kaohsiung with some lovely friends I’ve made here in Taipei. Again, we left buying the tickets too late, again, during a national holiday (this seems to be the common, and very stupid trend…), and were faced with the option: “Standing tickets” or cancel our plans. Of course, we decided to proceed onwards with our plans. Knowing that our best way of survival was to stake out a precious area of floor space, we set up camp in the area reserved for luggage space. In a matter of seconds the area on the other side was snatched up by the other passengers. 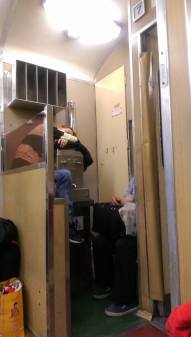 We quickly got acquainted with the floor, and -I kid you not- other seatless passengers were looking enviously at our little patch of floor. When night fell, the four of us started to take our positions lying on the floor. I was in a very compromising position with Conrad, doing the good ol’ “topping and tailing” technique. For the unfamiliar, this position will find your face at eye level with another’s feet. Sexy stuff!

For a blissful while, this worked, but soon it all crumbled when our system of entangled limbs did not satisfy all. “OK, you sleep for a bit and I’ll stay awake, and then we’ll swap”. Let’s just say I was not the happiest of folk after managing to fall asleep only to be awoken to honour my end of the deal. I guess a sleep agreement is a sleep agreement. When you’re seatless, you gotta take that shit seriously, yo!

And finally, for my most recent time. Last week, my wonderful housemates and I decided to make the most of the Dragon Boat Festival 3 day weekend and take a road trip from Taipei all the way down the east coast of Taiwan. It was all very last minute, and I shouldn’t have been surprised when we found out there were no return tickets. Risking it, went on the most awesome road trip (more about that next time!), and hoped that some return train tickets would free up. We were in luck! There were standing tickets which would leave Hualian at 9:15 pm and arrive back in Taipei at 11:55pm.

We decided the most strategic thing would be to quickly park ourselves down in the corridor between two carriages. Amy decided after a short while to try and survive in the tiny space behind the very last seats in the carriage and the wall, while Quyen and I unanimously agreed that our little spot, albeit narrow and dirty, was the best we were going to get. Seriously, you have to be ruthless with floor space, because there are always other seatless wanderers waiting to pounce on your million dollar equivalent spot of floor space.

Trying to make the most of the hours of free time ahead, Quyen and grudgingly started on our untouched homework due the next day. Homework is not fun to do at any time, but especially when you’re exhausted, unable to sleep, on a train floor. I finished a good chunk of mine, disappointed with myself for not producing very quality work, but relieved for having it out of the way, ready for my 7 am wake up call the next morning.

I learned a very important lesson. Do not do homework on a train floor. I had to write about the story of the Dragon Boat Festival. Not only did I get the two main characters names mixed up so that the very essence of the story was completely wrong, but I got the date of the holiday completely wrong too. My teacher must have been thinking, “This is absolutely terrible, it’s as if she wrote it hurriedly on a train floor!”

For the last 20 minutes of the journey Quyen and I were overjoyed to find ourselves seats. As we walked to the heavenly, vacant seats, we passed by Amy, fast asleep in a chair. A pang of envy ran through my bones- she had moved up the ranks from floor, to a hole in the wall, to a seat ever so quickly. And when I finally sat down- Oh, I can’t even describe how good it felt! My -ahem- gluteus maximus was aching by that time and welcomed the sweet relief or a non-floor setting.

Now, you are all probably thinking, “for the love of God, next time, please adequately make travel plans in advance so you don’t find yourself sitting on a train floor for the fifth time. IT’S NOT THAT HARD!”.

I hear you! I truly do. Although my past experiences might speak to the contrary, I do not – I repeat- DO NOT like traveling on train floors. However, something tells me that this is not the end of my train floor adventures. Just call it a hunch, but yes, I can see this faint vision of Future Me, sitting on the floor of a train floor, cursing that I found myself yet again, seatless.

Maybe there’s even a part of me that likes the adventure of it. Of course, given the choice, I wouldn’t chose to be on a train floor. But, as time has passed I look back on all those journeys with a smile. All those times, I was with great friends.  All those times, we could roll our eyes at our disorganisation, laugh at how ridiculous it was that we were seated where we were, and share a laugh about it all. All those times, I took away a story to tell.

Having said that, I’ve made a pact with myself. After 30: No more train floors. With my 26th birthday just over two weeks away, I’m giving myself another 3 more years of possible encounters with train floors. After 30: this girl is going to be 100% floor free.

Yours in seated goodness,