Day 2: Let food be the pathway to friendship

February 17, 2015 · by TypingToTaipei · in Food, housemates, Night Markets, Settling in, year of the sheep · 2 Comments

Dear Taipei, I’m enjoying catching myself wide-eyed, completely in a trance at all the things you throw before me. Just walking down the street is an experience. Seeing everyone go about their daily life- doing things I do in Sydney, but here, when I watch people everything is so fascinating- a feast for the senses. I can see and hear so many exchanges between people- but have no true understanding of the ideas, feelings and emotions they are trying to convey. The words I hear carry so much meaning, and yet they mean nothing to me. I get by literally with “Hello” and “Thank you”. The pronunciation for “Sorry” eludes me, so I can’t even apologise for my bad apology. I want to say so much- to ask questions to feed my curious mind, to clarify, to order. To show myself through my words, and thereby a shade of my character. But alas, the words which I used so freely and thoughtlessly have become but a pile of millions to carefully select from- hoping that the ones I chose mean something to the person who stands across from me, waiting. Now I’m already 4 days in and I feel I have done so little, yet I have so much to write about! 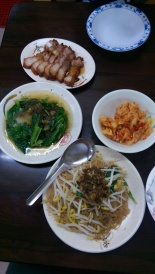 On Day 2 I spent day to night with my fantastically fun and gorgeous housemate, Amy. We get along like a house on fire (another simile would probably have been more appropriate). Our day centered around talking and eating- two things which go hand in hand with each other!

If I dare say, I see my skills of simultaneously pointing to the wall menu and using finger signalling and simple english to communicate food transactions strengthening. So through such efforts we were presented with some meat with caramel sauce, fresh stirfried noodles and blanched greens! Everytime I see the bill I am in shock- less than $4 for a filling, delicious meal for two? 谢谢 indeed! (xièxie – Thank you).

Next, we happened to stumble upon the markets I went to by myself, so we trawled through there- mouth agape- still not acclimatised to the carcasses dripping with fat and blood, and the stunning colours of all the fruit and vegetables- some of which my eyes have never seen.

We then had a proper, very serious “what do we need to get for the house to make it livable” discussion over a very mature gigantic milk tea. We’re very lucky that we have most things in terms of furniture- but are missing some minor things like one bed and frame (mine!),

cutlery and cleaning supplies. So we began to remedy the situation by at least getting the cleaning supplies. And what fun we had! Seriously, we were laughing in the aisles, having the time of our life. You know you’re in for a good year with your housemates when you can have a cackle choosing which bottle of cleaning product is best. The answer is “Mr Muscle” (No joke, it’s actually amazing. Please hire me.) 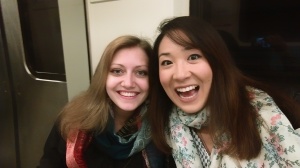 After doing all that “adult stuff” we rewarded ourselves with a trip to Shilin Night Market. Wow, just wow. It is so amazing! Imagine just a world of food all cheap, delicious and accessible. No, no, no. That does not do it justice. It’s basically HEAVEN for your stomach. My eyes shot from one side to the other, oooohing and ahhhing at all the choices on offer. Fried chicken, sticks of juicy meat, soups, stir fries, omelets (seems like oyster omelets are the cool thing), it’s almost torturous because you want to try everything but you know you physically only have enough space for, say, 5 different meals (nojudgingme.com) 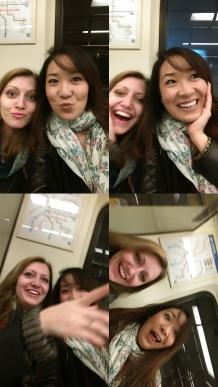 Anyway, Amy led the way to an underground “food court” which offers respite from the loud, long lines of the outside stalls. Conveniently it was more like mini-restaurants each with tables/counters and seats to happily munch away. We hit the ground running with a seafood restaurant. Saucy crab and butter cod fish (Around 100NT each/$4 each). Ohhhh the crab was especially divine. Yes it looks really scary, like maggots, but I promise you it is just fantastic.

Then we gorged on three types of dumpings which were delicious. Despite our efforts to fit in, after buying one set, we accidentally sat down on the seats at the ajoining restaurant. All the workers kept looking at us, completely bemused, and it was only after some tense moments that I realised, “Oh man, we are sitting in the wrong place- RUN!”. It was an easy mistake to make, but made for an embarrassing exit… namely to the restaurant in front, as the guy who was ushering in offered a quick but not so covert escape from the shame (and also the cure of dumplings). 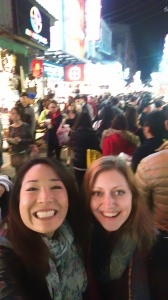 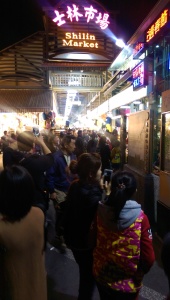 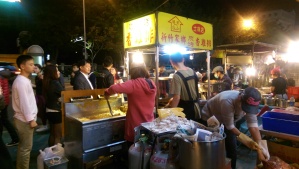 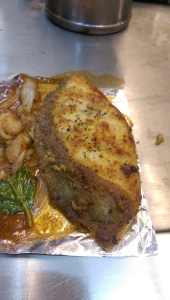 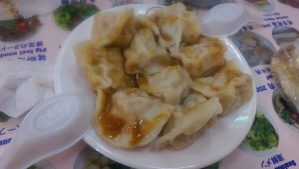 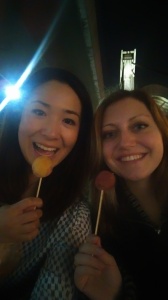 For dessert we had these most amazing sweet potato balls. I’ve never seen anything like them. Basically, they are these solid mounds of potato, and they are deep fried in oil. The stall person has to push down a colinder-like fixture into the giant wok to pump air into the mounds, essentially pumping them up with air to form these light, fluffy, perfectly cylindrical balls.

It was hard work- the whole stall shook as he used all his might to magically transform these balls. (Adding that to the list of “My Perfect Man”). They taste like sweet mochi (pounded rice cakes) and are crunchy on the outside, and are the interesting combination of both chewy and airy on the inside. We got ours sprinkled with plum salt!

Our final stop was a bar in the clubbing/bar district in the Taipei 101 area. There were many sculptures for Chinese New Year on display- they were so cute! Oh, and I forgot to mention it was Valentine’s day! We saw the big “LOVE” sculpture and there was a couple in the fully making out. It was rather sweet! We chose a bar with a nice verandah to chill on. I got a drink called “Monkey Magic”- basically an alcoholic banana milk. Yes, I am 25. As it was a more “upscale” place (read: not the nightmarkets), the cocktails were around  140 NT/$6. I could get used to this- sorry liver! 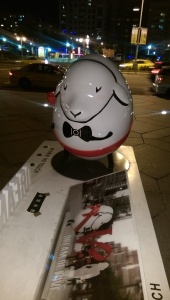 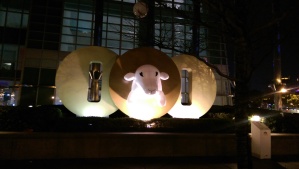 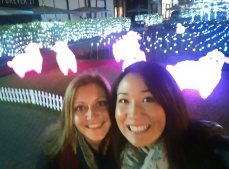 Then we walked home in 10 minutes. If the significance of this is lost on you, it’s that Taipei 101 is a huge cultural icon given its sheer height and rather beautiful architecture, and basically the hub of all the cool nightclubs and bars in Taipei. So we are super lucky to live in such a convenient area (at a cost to Quyen and my school commute and Amy’s workplace commute which will take around 30 mins on the MRT!). Priorities, right!